WELCOME TO THE BRAZILIAN JIU-JITSU PROGRAM

Our instructor is a Renzo Gracie Black Belt. 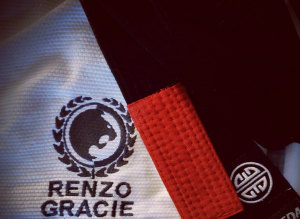 INSPIRE – LEARN – EVOLVE offers world class, authentic Brazilian Jiu-jitsu. Promoted to Black Belt by Kevin Taylor and Peter Martel, our Instructor started training BJJ in 2004. As a professional soldier, he travelled throughout the world and maintained a strong relationship with Renzo Gracie Jiu-jitsu.

His true passion is teaching others and it shows in the outcome. With over 20 years of experience in various martial arts and his military experience, he strives to bring the best out of everyone. A selfless leader, he intends to represent his Instructor and Team to the best of his abilities while ensuring that the students, get the most out of their Brazilian Jiuj-jitsu experience.

– Together we shall conquer!

BLACK BELT INSTRUCTION. Self-Defense training which also includes the opportunity for participants to train in authentic BJJ. This component of Self-Defense is very popular and welcomes various ages, genders, levels of experience and fitness levels. WE OFFER FREE INTRODUCTIONS TO BJJ.

Not familiar with what BJJ is? For more information about BJJ please visit the International Brazilian Jiujitsu Federation. Check out this interesting read on Brazilian Jiu-Jitsu. & make sure you take the time to follow this awesome Brazilian Jiu-jitsu BLOG with techniques @ JEN REVIEWS

The intent is to introduce participants to quality BJJ training while implementing an efffective, friendly and safe curriculum. Participants will have the opportunity to train BJJ recreationally or test their skills through competition circuits.

Our mission is to ensure that each person that steps onto our mats, is treated with respect and given the personal attention that they deserve.

What is Brazilian Jiu-jitsu?

Over four centuries ago in northern India, Buddhist monks were busy going about the dangerous work of trying to spread the word of ‘Buddha’ in a world that wasn’t always kind to roaming peoples. In order to defend themselves from attacks that happened along the way, they developed a form of grappling that allowed them to subdue opponents without killing them. Eventually this style of fighting made its way to Japan where it was improved upon and called jujutsu or jiu jitsu. Judo is a derivative of jiu- jitsu.

The Japanese sought to hide jujutsu and its derivatives from the western world, but nothing lasts forever. In 1914, Kodokan Judo master Mitsuyo Maeda (1878-1941) came to stay at the household of Brazil’s Gastao Gracie. Gracie helped Maeda with business in the area and in appreciation of this, Maeda taught Gastao’s eldest son, Carlos, the art of judo. In turn, Carlos taught the other children in the family what he knew, including the smallest and youngest of his brothers, Helio.

Helio often felt at a disadvantage when practicing with his brothers because many of the moves in judo favored the stronger and larger fighter. Thus, he developed an offshoot of Maeda’s teachings that favored leverage over brute strength and refined the formula for fighting from one’s back on the ground. Today the art that Helio refined is called Brazilian Jiu Jitsu.

Brazilian Jiu Jitsu is an art based in ground fighting. Along with this, it teaches takedowns, takedown defense, ground control, and especially submissions. Submissions refer to holds that either cut off an opponent’s air supply (chokes) or look to take advantage of a joint (such as armbars).

Brazilian Jiu Jitsu fighters tend to feel very comfortable fighting from a position called the guard, if need be. The guard position– in essence, wrapping one’s legs around an opponent to limit their movement– is what allows them to fight from their backs so effectively, and is also something that separates their art from most other grappling styles.

Brazilian Jiu Jitsu fighters look to take their opponents to the ground. When on top they generally hope to escape their opponents’ guard and move to either side control (positioned across an opponents’ chest) or the mount position (sitting over their ribs or chest). From there, depending on the situation, they may choose to continually strike their opponent or set up a submission hold.

When on their backs, Brazilian Jiu Jitsu fighters are very dangerous. From the guard various submission holds can be employed. They may also seek to turn their opponent over in an attempt to reverse their fortunes.

As with other martial arts, the progress of a student is marked with a series of coloured belts. Unlike other martial arts where a Black Belt marks a person’s proficiency in a style, in BJJ, the rank of Black Belt is conferred to individuals who have mastered the art of Brazilian Jiu-Jitsu.

The belts in order are: White, Blue, Purple, Brown and Black. Often schools award four stripes for White through Brown belts. Black Belts are typically awarded one stripe every three years up to ten stripes. There are special classifications for Black Belt fighters and instructors. Instructors have Black Belts with red bands and Black Belt fighters have white bands. Typically, Black Belt instructors are not allowed to promote others up to Black Belt rank until they receive their first stripe. The ranks for children are different. Blue belt and higher ranks have age requirements so children have the following ranks beginning with White, Yellow, Orange and Green. Each belt has 4 stripes. These belts are utilized until age 16.

We follow the IBJJF ranking system for children 4-15 and with respect to policies, will promote 16 & 17 year olds to the rank of Blue Belt if they meet the technical requirements.

In Brazilian Jiu-jitsu curriculum, students are graded based on skill and demonstrating good character which includes being a good training partner with team mates and positive individual in the community.

Martial arts is a platform to help people improve physically/emotionally, on and off the mats. Discipline, respect and accountability are attributes of honourable juteiros. We value these qualities.

Students are promoted from White Belt (Beginner Level) to Blue Belt. During this period we find that most students quit jiujitsu. There are several factors involved in this decision. A big reason for this is because Brazilian Jiu-jitsu can be very frustrating for beginners. As a result it becomes challenging for many. Most students do not continue past Blue Belt.  We understand this part of the journey, and will do everything in our capabilities, to ensure the progress of our students in a safe environment.

Next is the Purple Belt. This is the rank where students begin to transition between techniques in a more structured methodology. They have the skill and understand most concepts of Brazilian Jiu-jitsu and are usually experimenting with different styles/strategies.  At the Brown Belt, a student is mature and has created a systematic approach to Brazilian Jiu-jitsu, quickly understanding their strengths and enabling transitions to maximize success.

The Black Belt takes each individual different amount of time to achieve such an accomplishment. The work is not done. there is always something to learn. Black Belts will often teach classes and implement curriculum to help students progress.  There is a small percentage of students that will make it to Black Belt. Unlike other martial arts, a Brazilian Jiu-jitsu Black Belt is truly earned.  “A Black Belt is a White Belt that never quit”…OSS!!!